You are here: Home / Facilitation / Getting the Boss Onboard 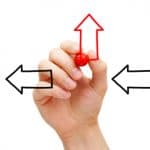 How often have you been in a meeting or a facilitated group only to see your collective progress thwarted by the group’s formal leader or manager? This is a common dilemma given that the manager is responsible for the product of his/her group and is therefore compelled to be integrally involved in what the group does and how they do it. Leaders impede creative solutions even further when they simply can’t remain in an unbiased facilitative role given the pressure of their accountability on the decisions made.

So is there any way around this dilemma? In my study of this question, I came upon a simple facilitation strategy called The Interaction Method, that seems to address this issue very nicely.

What is the Interaction Method?

Authors Michael Doyle and David Straus of How to Make Meetings Work, summarize their method in this way. “The Interaction Method rests on four well-defined roles and responsibilities which together form a self-correcting system of checks and balances. All four roles are equally important. Each contributes to the health and productivity of the group. No one person is in the traditional leadership role of having to ‘save’ the group. Instead, everybody has a stake in the outcome and is equally responsible for the group’s successes and failures.”
How Does the Interaction Method Work?

Facilitators know that the quality of group decisions and problem-solving made by well-facilitated groups are higher than those made alone. And better solutions and decisions by definition mean higher profits. Further, people leaving a well facilitated meeting feel better going back to work, working harder toward group goals and not requiring recovery from lousy meetings. This information should provide useful clues about the benefits of facilitation to leaders of less than optimal teams.

How the Boss Stays the Boss

As we implied earlier, meetings often go awry because managers try to play too many roles. It’s hard to play the “heavy” decision-maker and still run an open meeting. According to the Interaction Method, as a leader, you can’t be neutral, so why try? Besides, you have the big picture and need to contribute all you know about the problem. You can turn the running of your meeting over to a facilitator but still be in command. You decide on the agenda items, the process for managing them, who should attend, and how much participation you want from your staff. Ultimately, you get better input to make better decisions using this approach.

During the meeting and at all times you retain power to stop what’s happening and change the format. You can’t give away your power and responsibility even if you want to, so don’t pretend to. But if you want help from your group, be realistic about providing enough time and acceptance of what they bring to the table. Lay out constraints at the beginning then participate as a regular group member. Don’t be neutral, just express your ideas and share your ideas and knowledge. Support the facilitator encouraging him to play his role understanding it’s hard to treat you as an equal. So reinforce him for calling you on things. Try to talk less and listen more. Don’t let the facilitator go on to the next agenda item until enough is done and you feel closure on the present one.

In summary, using the Interaction Method, the boss continues to hold the power of decision, while the Facilitator manages the process, maintaining impartial freedom of speech for all participants. This solves a common problem with managers taking up the air time, and creating less than trusting atmosphere where all that should be said may not be said. Assign a facilitator who doesn’t influence meeting content and if they do, have them removed as the facilitator. If you’re a group leader and you have an issue you want dealt with collaboratively, step down as facilitator and into your role as manager and let someone else facilitate.
Action

How might you use the Interaction Method as a group leader? What group leaders or managers do you know with whom you might share this method? Please click on the Add Your Comments and tell us about it.