You are here: Home / Facilitation / Dealing With Difficult Behaviors 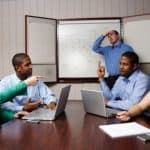 One of the most challenging things for us to deal with as facilitators is the “difficult” participant. I’m sure you’ve all experienced this either as a member or leader of a group. You know the kind of person I’m talking about. He’s the one who keeps interrupting the group to ramble incessantly on some seemingly irrelevant topic. It seems that everyone but he can sense the tension in the room and the members psychically screaming for him to, “Please shut up!”

Or you maybe you remember the antagonist. The one member that has to disagree, argue, or criticize every comment someone makes. Or the person who has a “yes but” for every idea put forward.

We’ve been so conditioned to be “nice” in our culture that we feel tongue-tied and helpless when someone else isn’t being so nice in our groups. As facilitators, and participants too, we have got to learn to compassionately and effectively handle these kinds of behaviors. The following tips outline methods of handling individual behaviors that we might consider difficult as facilitators.

Gracefully deal with the problem participant

Dominating the Discussion. A person talks too often, too long, or too loud, making it difficult for others to participate.

– Stop the person, thank him or her, and say you’d like to hear from someone else.
– Call attention to the agenda and time frames.
– Break eye contact. Move away from the person. Stop giving him or her focused attention.
– Move closer and closer to the person, maintaining eye contact. Get in front of him or her. The problematic behavior will start to stand out (even to the person).
– Summarize what the person has said and move to someone else.
– Give the person a time limit.
– Before the discussion starts, pose a standard for the length of comments. For example: “Let’s hear from a few people for no more than 2 minutes each.”
– When you know in advance that an individual or individuals tend to dominate a group, propose a ground rule at the beginning of the session that everyone “monitor the air time.” Explain that for some, this means talking less; for others, it means talking more.
– Introduce an inclusion activity to get everyone participating.

Inserting Personal Agendas. A person continually inserts a concern, a disagreement, or an alternative or additional agenda item. This is often annoying if it’s repetitious and distracts from the group task.
– Ask the person how what he or she is saying relates to the current agenda item.
– Record the point, thank the person, and move on.
– Ask the person what he or she wants the group to do with the input.
– Give the person a time limit.
Talking off the Subject. Sometimes people are out of synch with the agenda and regularly talk about things that are irrelevant to the group’s task or are out of sequence with the agenda.

– Ask them to relate what they are saying to the current agenda.
– Ask if the group can come back to their point and record it on a “parking lot” sheet.
– Ask others if they have anything to add to what the person said.
– Stop them. Tell them it’s not appropriate now. Bring it up later under a different part of the agenda.

Having Side Conversations. There are always people who have to make private comments to one another or carry on another meeting with their neighbor.

– Invite them to share what is being said.
– Stop the conversation, be quiet, and look at the people talking.
– Ask them to stop.
– Ask if they would please join the group.
– Move closer to the people having the side conversation.
– Repeat the topic under discussion and ask if everyone can focus on having just one conversation at a time. Say, “Let’s have one conversation,” or “Let’s al focus on the same thing.”
– Point out that the whispering or talking is distracting.

Being Constantly Negative or Antagonistic, or Presenting a Hostile Demeanor. Some people are nay-sayers, doubters, and cynics. Nothing is okay and nothing will work. They always seem skeptical. Their negative expressions may be either verbal or nonverbal.

– Acknowledge their points of view.
– Make a special point of thoroughly paraphrasing their view the first couple of times they speak. Stick very close to their exact wording.
– Point out the negative pattern.
– Ask if there is any part of the work that they feel good about.
– Ask for their opinions about what is needed. Record the opinions. Ask the group to respond.

Attacking, Criticizing, or Picking an Argument. Some people go after other members or the facilitator to argue or personally attack. Sometimes this is just counter-dependence, aimed at discrediting or trying to change what the group is doing.

– Describe, non-judgmentally, what the person is doing.
– Ask if the criticism or judgment (attack) is based on something that has occurred in the meeting.
– Stop any argument. Ask for and record a statement of each position. Engage other group members in discussing their positions.
– Ask the person what the group could do to respond to his or her concern.

Attendance Problems. Some people repeatedly arrive late or leave early, miss meeting , or make a habit of ducking in and out. These actions disrupt the group, delaying or halting its progress.

– Take the time to get an attendance commitment from the group. Enforce It.
– Speak to the person outside of the meeting.
– Don’t review anything or stop the meeting for such people.
– Suggest either or both of these ground rules: “Members agree to support any decision made in their absence,” and/or ‘There will be no reviews for people absent at any time.”
– Ask members to announce if, when, and why they have to leave, come late, or miss a meeting.
– At the beginning of the meeting, review the scheduled times and ask if there is 4nyone who will not be able to be there for any part of the meeting.
– Ask one of the group members to update someone on a break.
– Have the group leader ask these members to come to meetings regularly. If they can’t do that, replace them. Ask those who can’t regularly participate to suggest replacements in the group. Avoid allowing “temporary” replacements to ill in for another member.

Adapted from The Facilitator’s Fieldbook, by Justice and Jamieson.

Try one of these interventions the next time you facilitate a group. We’d love to hear what happens for you. Please share your questions, feedback, or experience on this topic in the comments section below.